Felix The Cat Wiki
Register
Don't have an account?
Sign In
Advertisement
in: Characters, Females, Heroes,
and 3 more

Oriana is the princess of the land of Oriana. She was betrayed by the Aristocrat Grumper when the Cylinders led by Master Cylinder and the Duke of Zill attacked. She was enslaved by Wack Lizardi, one of the duke of Zill's most high-ranking minions (beside Master Cylinder). When she along with Felix the Cat were escaping, Wack Lizardi's Living Circus Whip tried to trap them again but failed. She escaped the Head-Hunters, and was returned to her kingdom, thanks to Felix. Her first and only appearance was in Felix the Cat: The Movie.

She is a tall woman with long waist-length blonde hair, baby blue eyes and wears a frilly white ruffled medium-sleeved ankle-length dress trimmed with red and pink with yellow spots and a blue gem at the center of the collar.

While affable and tender-hearted, she is extremely clueless, having disbanded the nation's entire army despite there being a known threat against the kingdom, believing she need only rely on the people to fight back. This of course, failed. Then she tried to use the Dimensional Shifter to get away, which she could've used to defeat her relative a while ago as well.

She has magical tears capable of becoming sentient and performing tasks when she is in desperate need. 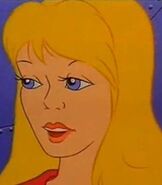