Felix The Cat Wiki
Register
Don't have an account?
Sign In
Advertisement
in: Characters, Villains, Royalty,
and 10 more

"End of the line for you. You are the grass and I'm the lawnmower." - The Master Cylinder

The Master Cylinder was an evil cyborg that appeared as a major antagonist in the 1960 Felix the Cat cartoon "Master Cylinder - Master of the Moon" (where he calls himself "King of the Moon") and he first appeared in Joe Oriolo's 1959 revival of Felix the Cat, he would then proceed to become one of Felix's main enemies throughout the series: unlike the Professor, Master Cylinder was never helpful or friendly to Felix in any of his appearances and remained villainous (while The Professor often switched between the role of an antagonist and an uneasy ally), except for one episode from the 50s where everyone, including the Professor and Rock Botton, celebrates Felix's birthday.. In his first appearance, he was defeated by being unplugged. He overcame this weakness by gaining feet and operating with a different power source. He can extend his arms, fly, and shoot lazers from the yellow rectangle on his forehead.

The robot gained its name from its shape (which resembled a cylinder). Poindexter's "glitchomatic" (the red button on his shirt) can cause him to malfunction for about 20 seconds.

He was given an origin in Felix the Cat: The Movie in which it was revealed that Master Cylinder was a creation of the Duke of Zill and the most powerful of the Cylinder robots and thus was the general over them - Master Cylinder would proceed to make a brief appearance in the movie when The Duke unleashed an updated version of the robot in an effort to destroy the heroes. He had machine guns, lasers, and a flamethrower. He had all kinds of gages on his face. He had sharper claws too. All the cylinders redirected their power from him so when Felix blew him up, the cylinders were destroyed too.

However Felix acted quickly and threw a magic tome known as the Book of Oriana which saved Felix and his friends, at Master Cylinder, causing the robot to explode and seemingly destroying his old enemy once and for all.

Twisted Tales of Felix the Cat

Master Cylinder made a return in The Twisted Tales of Felix the Cat episode The Extraterrestrial Robot. In the episode, he had join forces with an unnamed alien army to take over Earth, his plot was to have Felix distracted with a cheap vacation, so that he could kidnap Poindexter to force him into building his "doom machine" which would also be run by his brain. However, Felix manage to come back from his fake vacation, and learns about Poindexter's abduction, and thus comes to his rescue. Master Cylinder then tries to kill Felix by using a laser cannon, though he misses all of his shots, Felix then threatens Master Cylinder with a Can opener, forcing him to flee, though he promises to return. 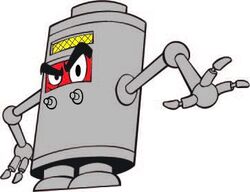 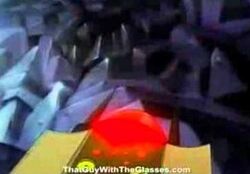 The Master Cylinder in Felix the Cat: The Movie. 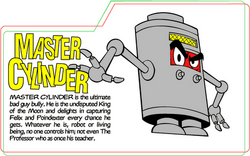