Felix's Magic Bag of Tricks is a magic bag owned by Felix the Cat that was introduced in the Felix the Cat TV series. Although it is usually called The Magic Bag (via title episode), Felix also calls it his "little bag-of-tricks" or simply "Bag(gie)."

It is a one-of-a-kind satchel, which usually takes the form of a suitcase/carpetbag halfmix, which is yellow with black markings. (Simpler drawings show the markings as black X's, but a closer look reveals the pattern to be black dots and near-floral, four-point stars.)

When Mr. Knock-off (in the Twisted Tales episode The Black Magic Bag) tried to make cheap-imitation copies of the magic bag (with the colors inverted and the magic dangerously unstable, he did a sloppy job), his partner Demitri, with computer data drawn from photos of the authentic bag in action, reveals that some materials that make Felix's bag are expensive (rumor has it that, due to feline worship in ancient times, the most common threads in the fabric are Egyptian cotton), and that the computer cannot identify most of the materials of which the bag consists.

While the origin of the magic bag and how it got to be Felix's prized possession remains a mystery until further notice (and even when that story is told, somethings will always stay hidden), it is no mystery that Felix uses it well, especially to help others, and those who steal it to use its powers for evil have better think twice, for one clue to its secret is the bag's loyalty to the cat who owns it...in fact, sometimes it has even demonstrated what amounts to a mind of its own!

While how Felix got the original magic bag remains a mystery, Baby Felix did get a practice model from his future self while wishing he can get a star from the sky for Baby Kitty to keep in her pocket. At first, the adult Felix refused to let Baby Felix have the bag, as it carries a big responsibility. ("The magic bag will be yours someday, but not until you grow up.") But being the mature version of the two, Baby Felix caught his future self in a good mood after painting over several ordinary bags to resemble the magic one. The adult Felix turned the real magic bag into a washing machine to make it as though Baby Felix (who apologized for being bad) never got the idea of having his own magic bag in the first place...understanding, adult Felix gave Baby Felix a magic "baby bag" to practice on and along with the usual magic words ("Magic Bag, do your Stuff") the adult Felix explains that its magic comes not from saying the words, but more from feeling them. ("Concentrate on what you want the bag to do, and it'll do it...that's the magic.") In addition, Baby Felix was warned he could only keep the bag on two conditions:

1. The bag and its magic must be kept a secret. (Baby Felix almost blew it at show-and-tell. Kitty took a lucky guess, but when he used the magic bag's power to save one of his friends, Monty the mouse, from drowning, Baby Felix spilled the beans, causing a vision of his future self to appear with a reminding "shush!" This caused both Monty and Baby Felix to freak out at the sight, rocking the bag's washtub form used as a boat!)

2. He must never use the bag for anything bad. (Being little yet, Baby Felix's "bad" mostly revolves around mischief and pay-back. Thus, when the bag's magic was used to melt the ice cream of the Bulldog Brothers in vengeance for a prank-trap they used on Baby Felix earlier, the adult Felix takes away the baby-bag until Baby Felix learns to be responsible. Of course, being the future self, he already knew that would come sooner then expected, when Baby Felix tried to help the Bulldog Brothers when their house caught on fire. Blaming the little cat for water damage when he got his bag back in firetruck form, the Bulldog Brothers refused to thank him, and got sprayed with water. The adult Felix winked at his younger self, saying, "They probably deserved it.")

Over the series of the whole series, Baby Felix practices magic, especially with the bag, and lands himself in problems he's not supposed to run into until he's older (like The Professor), but over time, somewhere, the mishaps were all forgotten, and the magic baby-bag disappeared, but all that "pretending" made Felix better prepared for when he and the real magic bag got together for the first time (by the slight glimpse of the 21st century CGI cartoon, the bag somehow found him, taking him by surprise), and along with the trigger phrases he used as a kitten, Felix discovers the magic bag can also be stretched into whatever form needed if shaped with similar imagination and focus, yet the old rules still apply, as he never reveals the secret of how to work the bag, and he never uses it for anything bad. (This holds true even though, being more mature, "bad" has moved up from mischief and vengeance to evil and spite.)

The Magic Bag in the 1959 series, as seen in Into Outer Space

The Magic Bag with Felix, as seen in Felix the Cat: The Movie

The Magic Bag in The Twisted Tales of Felix the Cat, as seen in Shocking Story 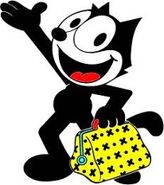 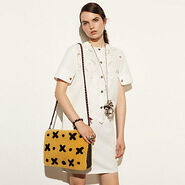 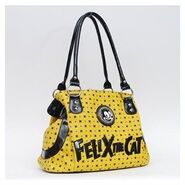 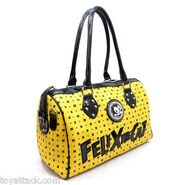 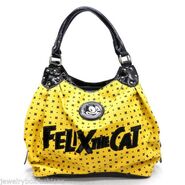 Add a photo to this gallery
Retrieved from "https://felixthecat.fandom.com/wiki/Felix%27s_Magic_Bag?oldid=6379"
Community content is available under CC-BY-SA unless otherwise noted.