Felix The Cat Wiki
Register
Don't have an account?
Sign In
Advertisement
in: 1919, Black-and-white cartoons, Silent cartoons,
and 2 more

Feline Follies is an animated short film released in 1919.[1] It is the first appearance of the character that would soon be christened Felix the Cat, here referred to as “Master Tom.”

Master Tom works as the watchman of a house, protecting it from the mice that hide in it’s holes.

One afternoon, while his owner isn’t home, Tom decides to go out for a date, irresponsibly. While the house is unwatched, the mice appear and start a feast. They eat all the food, drink all the milk and make a huge mess. Meanwhile, Tom and his girlfriend, Miss Kitty White, enjoy the day together, with music and kisses.

Helpless and depressed, the cat goes after his girlfriend just to find out that she got pregnant and that he’s now father of seventeen young kittens.

Desperate and hopeless, Tom runs away and finds a gas outlet. Seeing no sense or bright in his life, poor Tom kills himself with it. 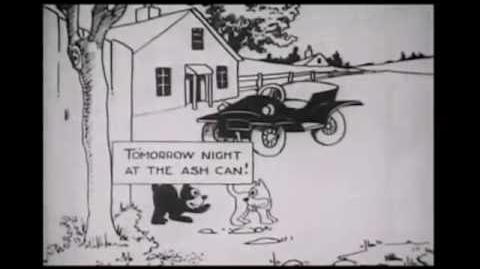